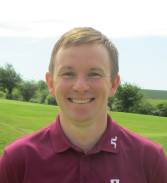 Michael played his first round of golf on his 10th birthday at Hollingbury Park Golf Club, scoring 122. He became a junior member at Pyecombe Golf Club aged 11 and went on to win the Junior Club Championship 5 times and the Men’s Club Championship aged 17.

Michael represented Sussex as an amateur and captained the county on several occasions. He won Sussex Champions of Champions and the Sussex Order of Merit in 1999, turning professional the year after whilst working as assistant professional at Pyecombe Golf Club.

In 2002 he started work at East Brighton Golf Club and at 22 Michael became fully qualified with the PGA.

Michael’s most notable playing achievements are finishing runner up in the Sussex Open and the Sussex Professional Championship.

Michael now takes up a further role as professional at our golf club.